The graphic novel told story of a corporate thug turned hero of the working man after he gets fired from his job shilling feel good ultimatums is full of clever political puns and...cleverisms. Seriously, you'll marvel at the authors' wit on nearly every page. They provide data (in the form of clever satirical ads) to back up their anti-capitalist point-of-view. The art seems (to my ignorant text-biased self) to be right in tune with comic book superherolands. My chief complaint, if you can view it as one, is the denseness of the clever. I can see this working better as a daily comic strip where stopping to marvel at the wit doesn't pile up all at once to give you a repetitive smirk injury.

Extraordinary, Ordinary People is a great title, but inapt for this book. Toward the end Rice quotes the Greatest American Hero theme song "Believe or not, I'm walking on air." (YouTube link) I think a more accurate title in the same vein, would have been "Believe it or not, it's just me." Whether you love or hate her (and I'm in the latter camp, though I'd probably say "fear/revile," rather than "hate"), you have to acknowledge that Rice is in no way ordinary. Most people know she excelled in piano, but did you know she was also a competitive figure skater in her adolescence? Ignoring her political accomplishments (or crimes, if that's how you see them), she is a superstar solely as an academic, having achieved the rank of full professor and provost at Stanford University before she was 40. Also, although Rice clearly loves and appreciates her deceased parents and extended family, this is not a memoir of family; it's an autobiography from birth (preceded with a little family history) to the Supreme Court's 5-4 decision in favor of W. To me it's also interesting as a memoir of the Birmingham Black middle class.

Tween Black Panther lit! Three kids travel to Oakland for the summer to stay with their estranged and unmotherly mother. She sends them out every day to Black Panther breakfast and summer camp while she stays home and writes poems for the revolution. The story is told from the oldest girl's point-of-view. At 11, and motherless for most of her life, she takes care of her younger sisters and is fearful about hanging out with the Panthers. Still, she takes in their message, and it makes her stronger. Not that she wasn't plenty strong already. Delphine is a nuanced and believable character, as are her sisters. I loved the tidbits defining African-American kids lives in the 60s/70s, them counting black people on television and how many lines they had, encountering white hippies in the Haight and Teutonic tourists in Chinatown, and most of all their getting to see the BPP as an aid organization.

I'd read DTWOF here and there, mostly on the interweb, like especially when the main character, Mo, decided to go to library school in 2001, and the link to that strip got forwarded around the bibliosphere like crazy. But without regular exposure, I had not realized just how brilliant the biweekly comic strip is. I can't believe (okay, I can believe but don't want to) that it isn't syndicated in every newspaper that carries Doonesbury, or at least Boondocks. I'm guessing it's the title? Which is unfortunate also because this comic is relevant to all people with radical left politics. Maybe even liberals!

My summary of this not-too- far-in-the-future dystopia in four haiku stanzas:

Hacker teens fight the
power and teach the reader
about crypto tech.

Teen reader primer
on history, politics
and the internet.

Plus boy meets girl.
Parents are dumb then helpful.
Ends with vote or die.

"I'm hardly an expert on international law.
"Just a retired librarian.
"But since Nuremberg, isn't 'following orders'
inadmissible as a defense against charges of
committing torture, atrocities, and war crimes? 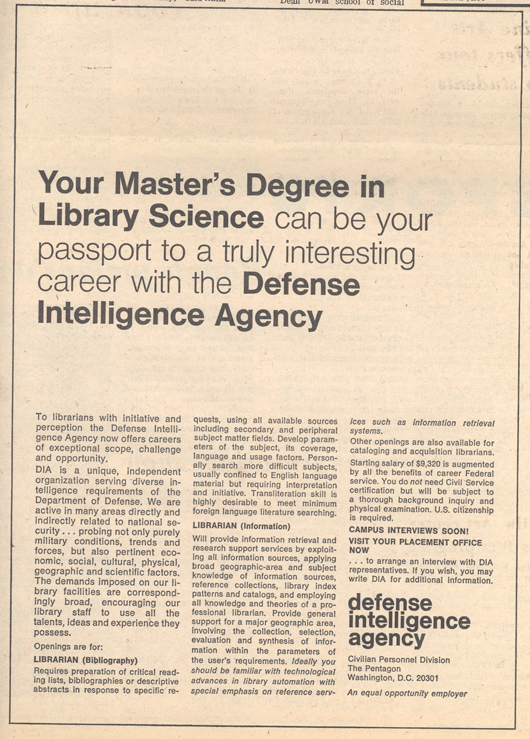 From the January 9, 1970 edition of the UWM (University of Wisconsin at Milwaukee) Post.

Courtesy of Milo Miller of QZAP.

The other day after ogling cats on I Can Has Cheezburger, I decided to check out the other links. LOLdogs, ho hum, but the political humor one, called Pundit Kitchen had some good stuff.

One of my favorite political cartoonists, Stephanie McMillan, whose cartoons I read via a Comics.com email feed just published two strips about Bunnista vs. the Chainsaw factory that cracked me up.

[Read My T-Shirt] for President...a True History of the Political Front--and Back a new book with one chapter researched at Barnard. Thanks for the thanks.