Soledad is an 18-year-old Cuban-American dancer from Miami making plans to go to NYC and audition for ballet companies when she's presented with the opportunity to go pro with a drum and bugle corps. (Right? But it sounds like a really cool thing, and a great way to spend the summer after graduating from high school, not to mention with the hottie who suggested her for the gig.) 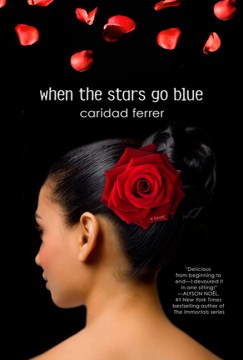 This time the lesbian teen is a different type of orthodox: Cuban-American from Miami. Laura gets busted with a love note from her girlfriend the last day of junior year and gets kicked out of her house for being a degenerada. Luckily she's got a best friend with and understanding mima who take her in. The book is Laura's journey out of the closet. I found it a little too much, like the author was trying to hard to pack everything in, and the cover reminds me of what they did to Leilaina's film in Reality Bites, turning it from a thoughtful documentary about lost youth into an MTV high concept/low content pre-reality show reality show. That's just the cover and crazy fontage I'm vilifying. The story is fine, but one of those YA novels that is better left to its intended audience instead of middle-aged ladies like me. It has plenty going for it: transgender and genderqueer characters, Cuban Spanish idioms, sexy round chicks, and standing up to homophobic bullies.