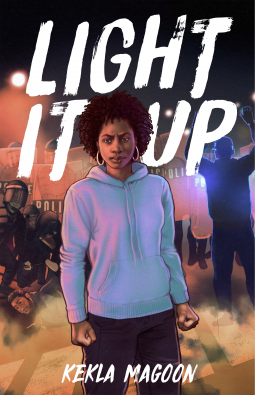 Light It Up takes place in the same universe--on the same street, even--as How It Went Down. It's not really a sequel and can be read alone, but I wish I'd read HIWD more recently and remembered it better. Like HIWD, LIU is told in multiple voices and is about the death of an unarmed Black teen at the hands of a white man, this time a police officer. 13-year-old Shae Tatum was running with her headphones on. I'm not sure who the girl depicted on the cover is meant to be, but she's not how I picture Shae, Kimberly, Jennica... I'm curious about the cover (and title) because I feel like this book about a community's reaction to being provoked, and the cover figure looks (to me, of course) like she's spoiling for a fight. I feel like the one character in the book really looking for trouble is ignorant white college student, Robb, and he gets it. And gets out of it. Robb learns a lesson, but who knows if it will really change him?

There's some great commentary in dialogue between news anchors and their guests, like an activist trying to explain the difference between protest and hate speech.

Guest: No. Empirically. My existence makes no threat to the personhood and liberty of a white supremacist. His existence does make a threat to mine.

Tina, an on-the-spectrum kid, and if I remember right, sister of the murder victim from HIWD, is the Greek chorus:

On paper
white out means
all you see is white
black type covered up
erased.
It is usually exciting
a clean slate--
the whole point of white out is
to make room for more black

Magoon has some sharp imagery herself, like Robb taking cell phone photos, and the sound described as a "metallic little scissor-click." Robb is cutting his friends while documenting them. That's a powerful thought for institutional archivists, as well.

We got nothing to lose. We gonna die anyway. Let it not be in a dark alley. Let it not go unseen. They coming for us. Let us meet them. Under the lights, in front of the cameras.

Revisiting that quotation, I understand a little better the "light it up" sentiment in the title, that it's about illuminating, rather than burning.