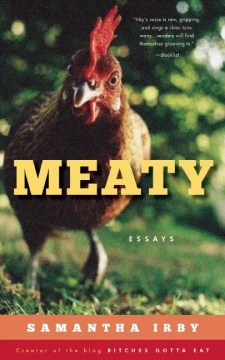 Much like Irby's second book, which I read first, Meaty is funny, smart, and full of poop. Irby has Crohn's Disease, so guts and their output are part of the package, which it turns out is super fun to deal with while dating.

Another thing that's not helpful--caring for your terminally ill mother by yourself when you're ten. It's not good psychologically, educationally, financially, or preparing you for adult life.

All I ever want to know about is how other people have sex. I'm so nosy and gross. ... It's not even really that perverted; I have a genuine intellectual curiosity about how other people get down.

"that perverted" "intellectual curiosity" LOL, but yeah. It's possible I had to look up some of her slang sex terms.

Irby writes about Girls and the "why are there aren't any Black people on the show" question in a way that makes sense to me.

Irby's dumb problem is that she doesn't have a boyfriend, not that she envies her girl friends their boyfriends.

You have a boyfriend, I have a cat. We're even. Helen Keller does everything a dude does: eats my fucking food, does what the fuck she wants, leaves her shit everywhere, ruins all of my nice things, and never cleans up after her fucking self. She never tells me what she's thinking, she rarely takes my feelings into account, she doesn't pay attention when I talk, and she only wants affection on her terms. SOUNDS LIKE I HAVE A GODDAMNED BOYFRIEND. Or, at least, it sounds like I have your goddamned boyfriend.

It's in this chapter, "Bitches Are My Jam," that Irby decides to give women a try, and yes, she's down to go down on a woman.