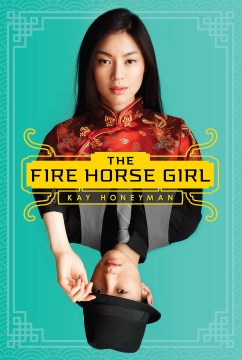 I'm conflicted about this book. I definitely enjoyed reading it and appreciated its window into Chinese immigrant life in 1920s San Francisco, I'm twitchy about it's potential for white saviordom, its having been authored by someone who "became fascinated with the history of Chinese immigration to the United States after she and her husband adopted a son from China."

The eponymous Fire Horse Girl (given name Jade Moon) is a seventeen-year-old only daughter of a rice farmer. Being born under the sign of the horse in a fire year is a bad thing for a girl. (Fun fact: I am married to a fire horse boy and myself and a fire goat girl.) Like her sign indicates, she is high-spirited and unpredictable in a time and place when girls should be quiet and pleasant.

Jade Moon is at times frustrated with her culture, "'You are too young to know how change should occur,' Father said, waving Sterling Promise's words away. 'I can change the outline of a rock quickly by carving it, but the edges will be sharp. If I set it in a river, it will be carved slowly over one or two generations, and those changes can happen without harming anyone.'" She doesn't have two generations to wait for change, and she is harmed by living in a world where a fiery girl is deemed unlucky and might have to marry the tedious fourth son of a bricklayer.

Sterling Promise is the same way. He asks Jade Moon's father if he thinks China needs to modernize and gets this response. "So we can have deadlier armies? So our government can take land that does not belong to them? So we can force people to worship as we do? The things done in the name of modernization seem backward to me." They're talking about moving to the United States, in case that isn't obvious. It's a deep thought. I am deeply American myself, though highly critical of the country that formed me. What do we sacrifice for innovation?

Another commentary on America, from someone Jade Moon meets in steerage traveling to San Francisco, "[Americans] have the best intentions, but sometimes they behave badly despite that. They are full of joy and anger, laughter and bitter tears. They let one emotion wash over them and then another. China is older and wiser, but there is a magic in the eyes of childhood, an ability to find the simple truths of life. These truths are appealing even if they are only fragments of what is real. Americans do no harm...most of the time." If you read those words thinking about a transnational adopter writing those words for a character she loves, what do they mean? Honeyman likens Americans to children though she herself brings children from China to be raised here. Maybe America is a better place to raise children because it is a childish country.

The someone, Mrs. Ying, observes later, "The Chinese make everything from bamboo. It bends without breaking because it is strong, but flexible. The Americans, they build everything from metal. That takes fire. We are learning to survive in their metal country, but not without sacrifices." Maybe adapting to a metal country is easier for a fire horse than for other Chinese because she does quickly find a place of potential power in her new country, despite arriving alone and friendless. Honeyman's constant comparisons of the two nations I think express her fascination with Chinese immigrants and that place where people are other in two cultures, but rarely both.

Jade Moon's whole story can be encapsulated in this poem she writes in her head, but is unable to write anywhere permanent.