The book isn't as good as the microblog, but that would be nearly impossible. I appreciate that Hagan didn't merely reprint the celebrity children entries she posted online, but organized the book into logical, coherent and snarky sections. 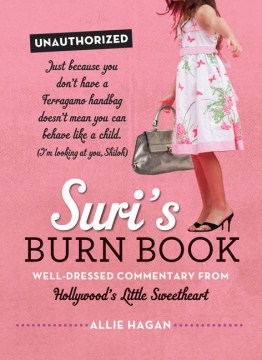 But maybe it's too snarky? No, that's not it. I think it's the Suri voice itself that I like less than its online counterpart. She's a little too arrogant in the book. You see her superiority on the blog, but not as much.

I can't tell you how devoted I have become to the blog, or why. Why do I love it so much? It's not like I even know who many of the celebrities are. I guess the idea of a five year old doing fashion critiques on children, infants and their famous parents is funnier than I would have thought.

Favorite bit in the book: Suri being pissed that she and Katie aren't part of the Dawson's Creek alumnae and their kids clique.