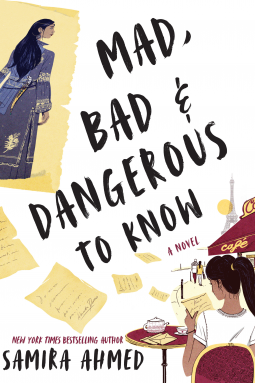 Bilingual, biracial high school art historian Khayyam Maquet is in France for the summer with her Indian mom and French dad, eating pastries and trying to prove an Art Institute critic wrong. Khayyam has a theory about Delacroix and Dumas and then meets a descendant of the latter but finds that she's more interested in the story of an unnamed mystery woman. We follow Khayyam and Alexandre Dumas the nth around Paris (and pastries) and discover the ways that they--and pretty much everyone but Khayyam's parents--are duplicitous.

The unnamed mystery woman element is of particular interest to me because of the French right to be forgotten legislation, which I kind of think is bs. Khayyam is conflicted. She wants the woman to be identified and remembered, but not exposed against her will. The dead woman, that is.

"People are lost in history all the time." Alexandre shrugs. "C'est la vie."

to which Khayyam thinks,

A woman who doesn't even get a name of her own. There are literally centuries of women who never got to tell their stories. An invisible hand squeezes my heart for the nameless women history brushed aside.

She wants the woman's story known, but is conscious that she herself is an outsider with something to gain. She's conflicted. I appreciate that! I also appreciate the teen historian-ness of statements like

When we kiss, I can taste the grime from this place on our lips, and it occurs to me that a lot of our kisses are sprinkled with the dust of centuries past.

I think thoughts like that sometimes, especially in old places. My friend Bridget lives in a building built in 1790. When I climb the narrow twisty stairs, I wonder if they're original, and when we eat and talk and watch TV, I wonder about the 200+ years of conversations and meals that have taken place in that house on Water Street.

Khayyam is a thoughtful person in many regards, considering Alexandre's positionality, as a descendant and what their mission means to him. Even so, they get into it a little.

"I only want to save the Château and Dumas's legacy. I'm not expecting to get rich off it. Of course, being an American, you think everything comes down to money."

"And I guess being a man, you think you can steal a woman's story and make it your own."

Neither of them is wrong, amirite? I've read all three of Ahmed's YA novels (Internment and Love, Hate, and Other Filters are the other two so far), and this is my favorite.