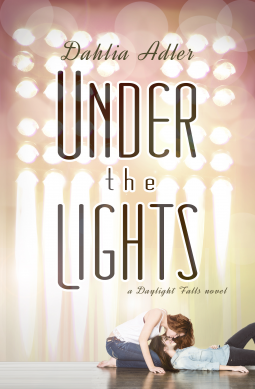 Under the Lights is the second in the Daylight Falls series, which I didn't know when I started it. Vanessa is a supporting player in the first installment, Behind the Scenes, and Josh is a minor character. You can definitely read the books out of order, as I did, but it's clear that you're missing some backstory. I like Under way more than Behind, so I could even say skip Behind.

In Under, we are introduced to teen movie star Josh Chester, who is a colossal asshole--misogynist, lazy, selfish, etc. For the first few chapters, I wasn't sure I'd stick with it. Vanessa Park is more palatable, but it takes a little while to warm up to her, too. Once you do, though, you're definitely rooting for her to man up about her love for a woman. In addition to confronting the politics of being queer and still having a mainstream career in the entertainment industry (she says "gay," though, not "queer"), Adler addresses Park's challenges as an Asian actor--always cast as a medical school prodigy and limited to supporting roles.

"How's your salad?" Zander asks me for the second time. He has a bit of cilantro on his cheek, but I've already told him a couple of times, and I've gotten bored of watching him try to get it. His fault for not realizing cilantro is terrible.