I first met Cherie in 2004 before the Republican National Convention came to town. I heard that the NYC Radical Cheerleaders ("I'm sexy, I'm cute, Political to Boot!") had a library school student in their midst who sported an anti-USA PATRIOT Act button when she cheered. I think it was this one:

Cherie joined Radical Reference and protested the RNC both cheerleading and librarianing. I remember seeing her cheering alone at one protest before I met her, and was awed by what a brave loudmouth she was. There's a reason people usually cheer in squads; it's really daunting to shout and dance by yourself.

Nowadays her primary outlet for all that energy seems to be running. The girl is a marathoner (personal record 3:28 in Boston!) and ultramarathoner. That's hundred milers, dude. For real! I mentioned on Facebook that I had a friend running the NYC marathon wearing pink and to keep an eye out. Another friend responded that she thought she saw her, and was she wearing a pink tutu. That would be a yes. The girl can run a marathon in under 4 hours (ahead of 30,000+ other runners), and is possibly the cutest one at the finish line. I love a librarian who is fierce, as well as smart and anti-authoritarian. That's why Cherie is my librarian crush of this irregular period. 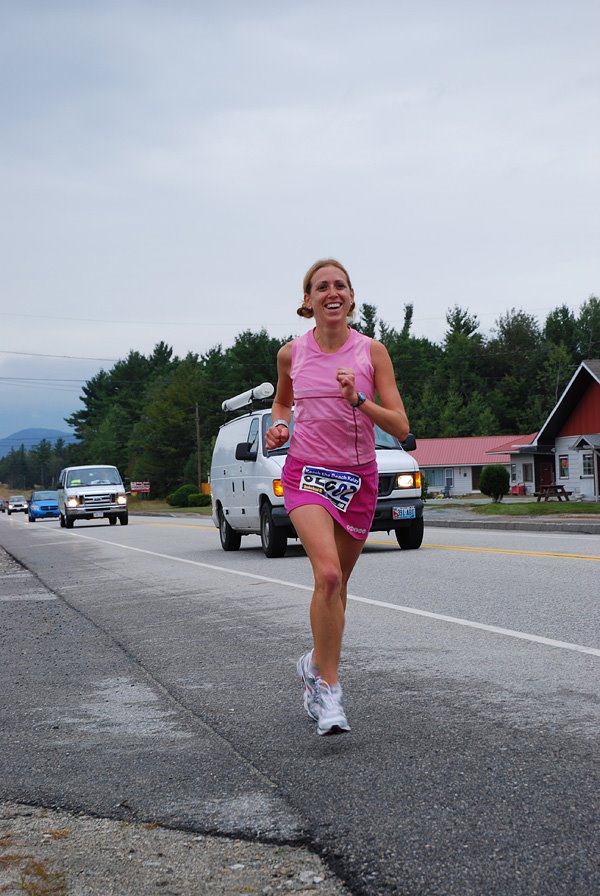 By day, Cherie is the Senior Associate Librarian at Catalyst's Information Center. She has an MFA in Writing and Poetics, as well as an MLS from Queens College.

I am hoping to make Librarian Crush an irregular regular feature on this here blog. I will write about a library worker or student I admire and whose awesomeness needs to be recognized, perhaps outside of the realm of Library Journal's Movers & Shakers and ALA's Emerging Leaders. Feel free to suggest crushables. Just note that despite my romantic preference for men, I'm only crushing on women here. Men get disproportionate attention in librarianship, so I'm not giving a brother a hand. Also note that the librarian must have a life outside of librarianship (unlike me).

I like this feature! Especially the life outside of librarianship part. Sometimes it's hard to remember that you can be a great librarian without it eating up your entire life and free time. I'm guilty of overachieving a lot, especially because I'm new to the field and have this feeling that I need to hurry up and prove myself. But I'm consciously trying to stop that! Perhaps I should take up running...

Yes! I love the librarian

Yes! I love the librarian crush idea! Also, since I keep forgetting to mention it but am remembering it now, your zine came in the mail while I was gone, and I am greatly looking forward to reading it, as always.