Library of Congress, could you add Trigger warnings? 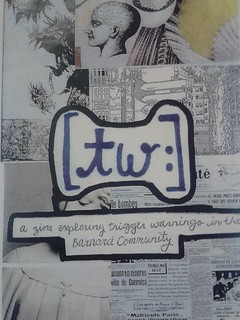 I just submitted the following suggestion to my pals at the Library of Congress:

I recommend adding the subject term Trigger warnings, or at the very least adding the phrase as a cross reference.

Your catalog contains an entire book on Trigger warnings. That record has assigned to it the subject headings
Freedom of the press.
Freedom of speech.

Those two headings may accurately describe the contents of that particular item, but many discussions of the concept of trigger warnings, including the item in my hand ([tw:] a zine exploring trigger warnings in the Barnard Community is not about those two freedoms, nor is it about Vulnerability (Personality trait), a heading assigned to Neil Gaiman's short story collection titled Trigger Warning. As described in this work, trigger warnings are meant to prepare people who are socially/sociologically, more than psychologically vulnerable.

The discussion in this work is focused on preparing students to deal with literature that may cause them emotional trauma due to inherent racism, sexism, or other dominant culture narrative. You may or may not agree that's a real issue, but trigger warnings are a phenomenon much discussed in media and academia, including this NY Times opinion and in The Chronicle of Higher Education and Inside Higher Ed.

via the "Literature and society" record

Thanks for your consideration!