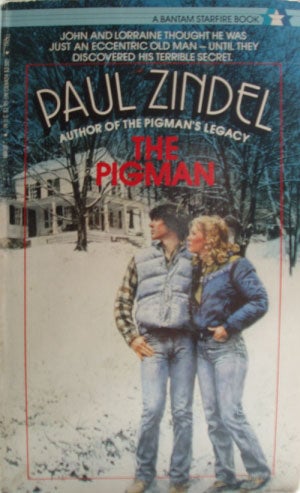 I hadn't read this 1968 debut in a really long time, thirty years maybe, and didn't remember any of it. The Zindel novel I remember the best is The Undertaker's Gone Bananas. I wonder how that one would hold up for me, since I wasn't particularly taken by The Pigman this time around. I found the two narrators' voices forced and too similar. I didn't realize before that Zindel is from, and this story at least, takes place on Staten Island. Not to malign Staten Island in any way, but when I feel like someone is unusual, and I can't put my finger on how/why, they often turn out to be from SI. So, Zindel's oddness makes sense to me in a way it didn't when I was a kid and didn't know anything about the NYC boroughs.

Whatever--the story is about high school sophomores who, as the result of a prank, end up befriending a lonely old man who is eager to spend time with and money on the teens. As people in that stage of development (and lots of other people, as well) are wont to do, they eventually abuse the old man's generosity, and it's bad.

I just reread it too and I

I just reread it too and I agree, I was a wee bit disappointed in how it held up but I was/am still impressed with how WEIRD he was and the cult of the outsider/the geek wasn't strong in those times and yet, he wrote these books. I especially like the fact that they were typical (horrible) teenagers and didn't care for anyone else and let him down so horribly. I remember being so shocked by that.
Had to comment as I am thinking hard about YA of this era.