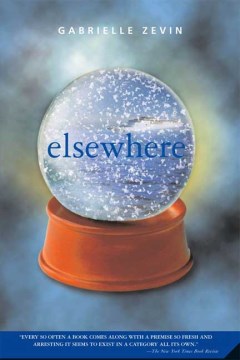 This is SPOILERish, but it's the whole concept of the novel, so hard not to talk about when reviewing it. If you don't want to know too much about the concept, the main thing is this is a great novel--surprising, the protagonist learns stuff about herself and the world, there's romance, but it ends badly without ending badly, and someone in charge of preventing people breaking rules breaks rules. I've loved everything else I've read by Zevin, and this book kept the streak alive.

Scroll down for the rest of my review.


The concept is that when you die, you go to "Elsewhere" and being aging in reverse, until you're a baby again and get sent back to Earth to be reborn. You get reunited with your deceased loved ones, including your human or animal companions.

Narrator Liz Hall is 15 when she gets killed in a bicycle vs. taxi hit and run. She's not a mature 15 when she is picked up at the pier by the maternal grandmother she never met in life. Grandma Betty, dead for 16 years, struggles to handle her unhappy teen, but Liz eventually finds some things to help her adjust to life after death.

Though light for the most part (for a book about someone dying young), there are moments of profundity.

As Liz is leaving, she reflects on her last words. If your last works are someone meant to encapsulate your existence, Liz finds *um* strangely appropriate. *Um* means nothing. *Um* is what you say while you're thinking of what you'll really say. *Um* suggests someone interrupted before they'd begun.