Land of Love and Drowning 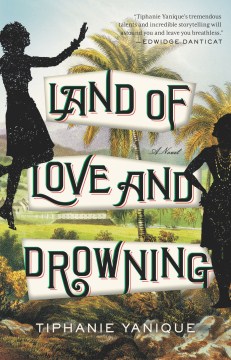 Like the ocean surrounding the island of St. Thomas where most of Land of Love and Drowning takes place, this book is long and deep. It's about orphaned sisters Eeona and Anette, and how the make their way in the world after their parents die, but it's also about the island's freedom and independence.

Despite how much time I spent reading it (nearly a week), I'm not sure I have much to say. I think an English major or Caribbean fiction scholar would have tons, so you'll have to look for their reviews and criticism. I'm more competent to speak on silly things, like Penguin's copyright statement:

Here's a good one on race in 1940s America, when one of the sister's love interest insists on getting served in a southern restaurant:

All this time, the rumors been coming about how some of our boys cause a ruction in New Orleans and get in a heap of trouble. We know is over some racial stupidness and we proud of them for all that. More proud than if they been fighting in Germany or Japan.

I also love how Yanique anthropomorphizes a storm, with statements like, "Hurricane Mary lasted for two days. Mary was pissed. Then she eased away, sassy, slow and satisfied." and how in Mary's aftermath, the islanders were psyched not to have revenue-generating tourists around, even though life without electricity and running water were hard on them, too.

Mary also serves as a metaphor for global capitalism and racism:

By the time Hurricane Mary reached the continental United States, she was much weakened by her travels. But the hurricane still brought the hurriedly built wood-and-sheetrock Continental houses down like so many dominoes. Mary killed many people in the U.S. But hurricanes do start off the coast of Africa, following a kind of triangle trade of their own.