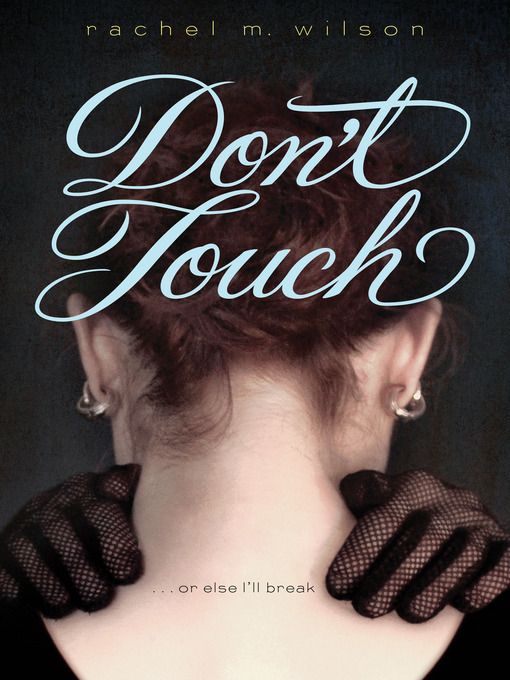 This year I'm trying to read more disability lit. I found Don't Touch on the Disability in Kid Lit Honor Roll, if you're interested in upping your disability reading game, as well. It's about a high school junior with an obsessive compulsive disorder that manifests in a fear being touched. Caddie's parents have separated, and she's worked it out that if she doesn't touch anyone/allow herself to be touched by anyone, her father will come back. (Apologies if I'm not explaining that right!) Caddie's self-awareness about her illness reminds me of an addict who knows their addiction is no good for them, but still cannot stop. This being YA fiction, there's a strong romantic motivation for Caddie to break her compulsion and get touched.

There's a bit of a story within a story, or subplot symbolism? of Caddie playing Ophelia to her would-be-paramour's Hamlet. Ophelia is driven to suicide by being rejected by Hamlet, but in this case Hamlet is not the actor playing Hamlet, but the actress's distant father who is unable to prioritize Caddie or keep his promises. Hamlet, played by Peter, is all but perfect. Side note--why are YA boyfriends usually all but perfect? Caddie also has an all but perfect best friend Mandy.

Mandy's insisting on cutting the kiss even though it changes her "vision." I didn't want her to compromise on my account, but she said, "Caddie, when you're ready to kiss Peter in real life, I will do backflips, but I'm not going to complicate your mental health for the sake of a play."

Dreamy BFF, right? tbh Caddie can be tough to sympathize with sometimes. She's dramatic and self-centered and withholding (kind of lying), but the self-awareness I mentioned earlier illuminates the heartbreak of her struggle. She has distance from it, even while being deep inside, and can make observations like this one,

Bats dip and play, and at first it takes me by surprise to see them there. In my mind, they came out special for the party--atmosphere for Peter and me. But here they are, a week later, not caring about me and my little drama, just doing their own batty thing.

Last quotation, just because it made me smile,

"Okay, but think of it like this, "Livia says. "What if a guy had to slay a dragon to be with you? How would you feel if he said, 'Sorry, I can't, too afraid'?"

Mandy cuts her off. "Livia, she's trying to distract you with feminism."

Ha! That reminds me, there are characters of color, including Livia, the #2 female friend and Oscar, the #1 annoying boy.