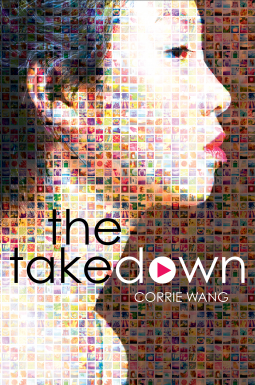 This is a future, but not too future novel about cyberbullying, and it takes place in Brooklyn. The protag, Kyla Cheng, is a popular kid at an expensive private school, who is leading the race for valedictorian. She's not perfect, though, and I bet many readers find her unsympathetic, even if she is unquestionably the victim of a crime.

An anonymous enemy posts a video of Kyla having sex with her English teacher. This enemy proves hard to track down and Kyla, her family's lawyer, the cops, the school--no one can take the video down. In this future, but not too future world, it is all but impossible to distance yourself from something you're tagged in. The tagging is constant, especially if you have a ConnectBook or Goog account.

The future Wang imagines is believable, and the slang feels exactly right. It's clever, sometimes a hair too clever, but I can accept that in a clever YA novel. Things like:

"And I all-caps LOVE your hair."

My stomach was the size of a pixel.

and instead of saying "hashtag [whatever]," the kids say "frowny face" or [whatever] emoji."

I also like how she turns on "clicks" in the military sense of kilometers and makes "clicks" into a measurement of time. "Currently, that day seems like a million clicks away."

Though Kyla can be self-absorbed, her family is pretty great. Here's how she describes her dad:

When my Dad was younger, he was in a Chinese gang in Flushing. Now he was a librarian who had R E A W  tattooed in Old English on his knuckles. It stood for "Read 'Em and Weep." He was better at gaming than Kyle and, in all honesty, he was probably hipper than me.

Clearly Wang knows a few librarians. She also knows that Kyla isn't always likeable. About halfway thorugh the story she has Kyla ask the unseen reader "How will me being me offend you the least?"

The characters in this novel by Wang, who I assume is of Chinese ancestry on one or both sides of her family are of varied racial and ethnic backgrounds. Kyla's primary love interest is Latino and uses a lot of Spanish in his regular dialog. Kyla is Hapa, but seems to feel more connected to her Chinese side. There isn't a lot about being Chinese in the novel, but it's more than a "happens to be."

I'm not someone who cares a lot about the mystery elements of a novel being too hard or too easy. I think Wang does a good job of keeping you guessing who is behind Kyla's video.