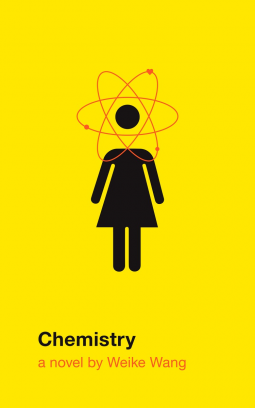 "In Arizona, a PhD advisor dies. Authorities blame the grad student who shot him, but grad students around the world blame the advisor. No student can graduate without the advisor's approval. This advisor had kept the student in lab for seventeen years, believing him too valuable to be let go or simply having gone insane. I think, Kudos to the student for making it to seventeen years. I would have shot someone at ten.

"My advisor is more reasonable than that, which is why he is still alive."

Chemistry is not the most light-hearted of novels. It's just over 100 pages long, but heavy. At the same time, there is room to breathe between lines and thoughts, like with poetry. Wang is an artist. Her unnamed heroine is not. She is miserable in her chemistry PhD program, and though she has a seemingly perfect boyfriend, a devoted best friend, and a dog, she is miserable all-around. She's a little hard to take, but I stuck with her for the poignant language, which reminded me of Susan Minot's spare style (I haven't read her in 20 or more years, so who knows if the comparison is even apt).

The protag is Chinese, born in China, and fully fluent in neither Mandarin, nor English. Well, she's fluent in English, but still makes non-native speaker mistakes. She's an only child and has a complicated relationship with her hard-driving parents.

Of Chinese proverbs she observes

I find it interesting how often beauty is show to make the objects around it feel worse.

Of her beautiful mother she observes

What my mother lacks in vision, she makes up for in hindsight.

Of her parents' parenting style

I am never grounded, never sent to my room without a meal. My parents find these punishments too easy. They believe a child should be made to feel bad for her actions, so their idea of scolding is to talk about her as if she is not there. The third person is used. The looking right past her. Whatever she says is not acknowledged...

Yep, so protag loses it one day in the lab and breaks some beakers and ends up in therapy. You get her, but you don't have to like her.

The trick to getting a dog to swim is to throw something he loves far into the water and then watch the anxiety get to him. He likes getting wet but not going into open water. Fear of sharks, most likely. He paces the sandy shore. He whines. Eventually he leaps into the water and becomes buoyant. The chew toy is saved.

Then I throw it again.

That passage--it gives me chills. She is horrible, but...fearless? Relatable? The opposite of relatable?