Though it starts off a little slowly, I eventually became entranced in this story of adolescence. There's magic and a love of literature, especially science fiction, but mostly what compels is the lonely, isolated, grief-stricken narrator. Mori has recently lost her twin sister in some sort of battle with their witchy mother. 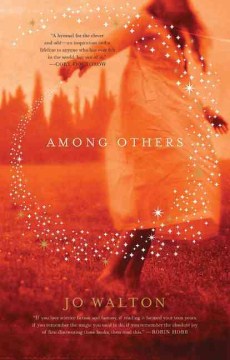 The supernatural elements are the most realistic I've ever read. The magic has to do with fondness and intention, and the doer is always aware of the impact her doings may have on the lives of others. In fact, Mori may have too much concern about her role in the world, in that self-conscious way of teenagers, where they think they're more important and powerful than they are. Okay maybe all humans are like that.

Interlibrary loans are a wonder of the world and a glory of civilization.

There may be stranger reasons for being alive.

There are books. There's Auntie Teg and Grampar. There's Sam, and Gill. There's interlibrary loan. There are books you can fall into and pull up over your head.

I still can't forgive Lewis for his allegory. I understand now why Tolkien said in the prologue that he hated them. You can't take something that's itself and make it stand for something else. Or you can, but you shouldn't push it. If I try to think of it as a retelling of the gospels, that diminishes Narnia. I think I'm going to have trouble re-reading them without thinking about it. That's so annoying!

"It'll be an interesting experience," she said. "It'll be nice to see how they do these things at the town library. And I always like hearing about books. Maybe we could start a book club here. Some of the older girls might be interested. Besides," she leaned forward and lowered her voice, even though we were the only people in the library, as usual. "One of the things they tell you in library school is that you have to consider the needs of the clients and keep them happy. Now you're definitely my best client, and one of the few people who is really using this library, so keeping you happy is important."

And I like this bit from Mori's Jewish Polish grandfather (Mori is Welsh) on The Communist Manifesto:

He laughed again, "It's a lovely dream, but it would never work. Look at what's happening in Russia now [1979], or Poland. Marx is like Plato, he has dreams that can't come true as long as people are people."

The Welsh elements are pretty cool, too, as it's a country and culture I don't know much about, even though I spent a week or so in Cardiff once.

I loved this book so, so