Age of Miracles, the

Like, wow. Walker can write her pen off. Come for the story of an eleven-year-old-girl's coming of age in a global catastrophe and stay for writing so good it can make the earth spin a little slower to give you time to enjoy it. 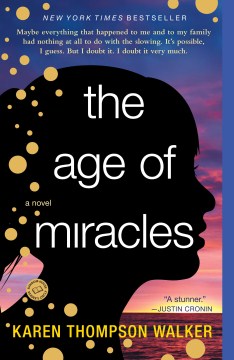 Not that I did take much time to enjoy it, having devoured 260 e-pages in a day and a half.

If this novel were written by a man with a boy protagonist, it would have won every literary prize there is.

Had this on hold from the

Had this on hold from the library but Bruce got to it first. The plot drew him in, but all he talked about was how frustrating it was from a scientific pov, i.e. she wasn't consistent about the effects of the phenomenon and how it worked. He kept referencing Ursula le Guin's essay "Do it Yourself Cosmology," in which she says:

"As soon as you, the writer, have said, "The green sun had already set, but the red one was hanging like a bloated salami above the mountains," you had better have a pretty fair idea in your head concerning the type and size of green suns and red suns—especially green ones, which are not the commonest sort—and the arguments concerning the existence of planets in a binary system, and the probable effects of a double primary on orbit, tides, season, and biological rhythms; and then of course the mass of your planet and the nature of its atmosphere will tell you a good deal about the height and shape of those mountains, and so on, and on…. None of this background work may actually get into the story. But if you are ignorant of these multiple implications of your pretty red and green suns, you’ll make ugly errors, which every fourteen-year-old reading your story will wince at; and if you’re bored by the labor of figuring them out then surely you shouldn’t be writing science fiction." (The Language of the Night, 122)

Me, I'm not particularly scientifically literate, so it probably wouldn't have bothered me - and I still want to read the book. Did that aspect strike you at all?

I was bothered by the

I was bothered by the science, or lack thereof, but not enough that it ruined my enjoyment of the language and how the story unfolded.

Ok, I read it and I enjoyed

Ok, I read it and I enjoyed it, except for the end, which completely fell apart for me. Because after all of the solar storms and 60-hour nights and everything is clearly going to HIAHB, suddenly it's 12 years later and she's still there? How did she survive? What happened? It felt like the author just wanted to wrap the whole thing up in a hurry.

The 12 years later thing confused me, but I didn't feel like she was wrapping things up in a hurry.

It also occurs to me that I've been reading so much crap lately that I was overly dazzled by Walker's extracompetent prose.

I picked this up because I

I picked this up because I read in a Martha Stewart magazine that it was a cross between Margaret Atwood and Aimee Bender (whom I love/like, respectively). This is probably the most inane reason I've ever admitted for reading a book, but it's the truth. I can see why the M.S. writer called upon the vision and style of Atwood & Bender, but I felt like Age of Miracles fell short of that hype. It was an enjoyable read, but not life-changing. It's solid entertainment, which is more than I can say about many novels, but it's not the kind of fiction that changes how I feel or think about the world.