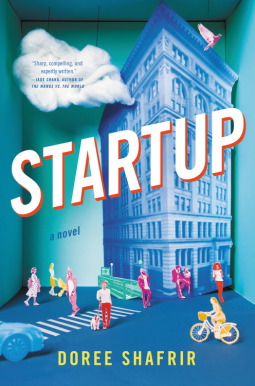 I did six months at a Silicon Alley startup and lost my job in the tech crash of 2000. That was before smart phones and apps, though, so this book about contemporary startup culture was familiar, but not the same as my experience. I was old for startups, even seventeen years ago, and not a founder or marketer, so a lot of the insider stuff about VCs and reporting was outside my realm.

The main protagonist, though the story is told from multiple points of view, is Katya, a 24-year-old reporter at TechScene, a startup that covers startups (which is so startup). One of the best characters is Sabrina, a back-in-the-workforce Park Slope mother-of-two whose husband is Katya's boss, Dan. Sabrina gets herself in debt. I want to believe this would really happen:

"I read about it on this Facebook moms' group I'm in. It seemed relatively painless. Someone--not me!--asked if anyone knew a good way to make some quick cash working from home, and someone else responded and said she'd been selling her underwear."

The Park Slope parents mafia is a thing, so it isn't a stretch to imagine Park Slope moms coaching each other on Craigslisting their panties.

I was also really taken with the description of this venture capital group's foyer:

...dark brown herringbone floors; a jute rug; black leather couch on a wooden base; two low-slung leather chairs that looked like they'd be tough to get in and out of; a square wooden coffee table with a silver bowl of lemons; a terrarium, and three hefty art books in a stack; a couple of big black-and-white photos of bridges on the walls.

The silver bowl of lemons kills me. They're in a presumably valuable vessel, but they're bitter and used mostly for garnish. They're the symbol of an irredeemably broken car. The terrarium, too, that it's an insular microworld, precious, and useless.

The politics in the book are solid, describing tech world stars as people who "donated their money to charities started by their friends and taught underprivileged kids how to code but voted against raising taxes to make those kids' schools better."

There are many characters of color, most incidentally, but Sabrina's Korean-American identity is a little more fleshed out. The book's endgame is a racism-reveal. The book's end is...abrupt.

Best/worst moment: when Katya asks, "Couldn't thirty-nine-year-olds just be old and tired and not talk about it constantly." Ever since I read that, though my answer when someone asks how I am is still, "tired," I hate myself.

Another generational observation, this from Sabrina, who at 36 is even more of an elder than I was in my dotcom days:

She couldn't remember, in her previous jobs, there being such an obsession with happiness. No one at the eco-crafting magazine had cared whether she was happy; everyone seemed resigned to the diea that happiness was elusive, ephemeral, and, in any case, not suited to life in New York City. But now, in front of her twenty-eight-year-old boss, she realized that [their startup founder and CEO] had only known a world in which his own happiness was of prime importance.

Devastating! Shafrir isn't dissing millennials though, so much as tech bros. The abrupt end is all about ladies uniting. Perhaps because the CEO and his go-to have conversations about being "in a very male-hostile moment."

While I was reading Startup, I considered it to be mostly fun and silly up-to-the minute pop fiction, but reviewing my bookmarks and thinking about the politics, I'm upgrading it to highly recommended status, even with its annoyingly abrupt ending.