Why on earth is it stepmothers who have the epic bad rep, when it's stepfathers who are known to be dangerous, especially to girls? Eleanor and Park is a story of teen love where the main thing getting in the way of the kids' bliss is one of the partner's shitty home life. Eleanor lives with her mother, stepfather and four siblings, sharing a bedroom with all four of the sibs. 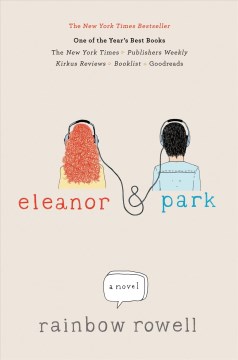 The boy gets girl part of the story is sweet and believable, but it's hard not to be impatient with Eleanor's reluctance/inability to get let her guard down and be more honest, even when you understand the source of her hesistance. (That's a typo that I think should be a word, combining hesitance and resistance.) Park is easier to love, but he's a nuanced character, like Eleanor is.

It's a quick, enjoyable read, and I just put holds on Rowell's other two titles, one of which isn't out yet, and I see there's a fourth that is even more not out. btw I've also looked down the rabbit hole that is my sister's Goodreads reviews. We have similar taste, and I added half a dozen of her recommendations to my NYPL holds and for later lists, as if I needed to add to the 300 or so books on my electronic to-read pile!

Thanks, Kate for recommending E & P! btw I was never a teenager in love, which is perhaps why I recognize the same thing in the love story that you did.