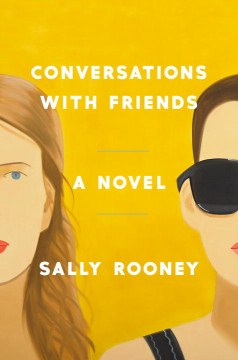 A friend of a friend commented on a Facebook reading thread that they liked Sally Rooney's next novel Normal People despite disliking all of the characters. That assessment mostly works for me on Conversations with Friends. The story centers on a love quadrangle: a married couple and a pair of best friends who are former lovers. They are in college, but met and dated in high school. Everyone involved is an artist of some kind. The friends, Frances the first person narrator and Bobbi are performance poets. Frances writes all of the poems, and Bobbi is the more consistent performer. Melissa, age 37, is a photographer and writer, and her husband, Nick, 32, is an actor.

At first it seems that the romantic tension is strongest between Bobbi and Melissa, who, like Frances, is bisexual. Nick, acting in a play, isn't around as much, so feels distant and affable, and mostly about walking the dog. Neither Bobbi nor Frances is dating anyone else, and they are essentially a couple, even if they're not currently sleeping together. As it turns out, for a time, none of the four is sleeping with any of the others.

It seems that there's something about Frances. She keeps quiet a lot of the time, and Bobbi says of her writing, "What I like about your male characters...is they're all horrible." There are no quotation marks in the novel, by the way, a trend I Do Not Like. But maybe that's more common in Irish literature than American?

Despite a protagonist who is a writer, CwF isn't full of showy writing. It's mostly spare, but occasionally Rooney busts out a fancy image like,

A bumblebee flew through the open window and cast a comma of shadow on the wallpaper before flying out again.

That happens about a third of the way through, threatening a sting, pausing, and moving on. The poison that kills its wielder doesn't occur until the last sentence.

I don't normally go in for philsophizing in novels, but I was moved by this paragraph, which occurs while Frances is in physical torment and taking refuge in a church:

Instead of thinking gigantic thoughts, I tried to focus on something small, the smallest thing I could think of. Someone once made this pew I'm sitting on, I thought. Someone sanded the wood and varnished it. Someone carried it into the church. Someone laid the tiles on the floor, someone fitted the windows. Each brick was placed by human hands, each hinge fitted on each door, every road surface outside, every bulb in every streetlight. And even things built by machines were really built by human beings, who built the machines initially. And human beings themselves, made by other humans, struggling to create happy children and families. Me, all the clothing I wear, all the language I know. Who put me here in this church, thinking these thoughts?

I've had moments like that, where I've been conscious of the tiny moment I'm in, or of the lights I touched on a stage, or the books I selected in the library, or the zines I folded with my two hands. When I worked at a 700-year-old theater in Germany, I thought about all of the lives that had passed through it, but not of the people who laid the stones of the crypt. I'm not sure, if I were Frances, if I'd find those thoughts calming or overwhelming!

I didn't want to the book to end and immediately place my hold on Normal People, which I can expect in about two months. Goodbye Frances, I never really got to know you, but I miss you nonetheless.