With Caroline Paul laid up after an accident and a new girlfriend on the scene, one of her cats goes missing. The cat comes back, but perhaps being bored from lying around the house, or maybe because she's just like that, Paul wants to know where the cat, Tibby, went and who took care of him while he was gone. 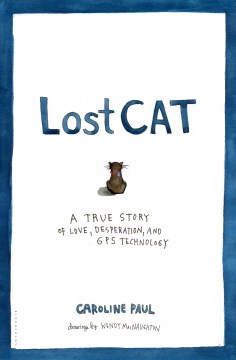 It's a great story, and the illustrations by girlfriend MacNaughton are beyond great. They both get cats on a deep level, as you'll see from these drawings and quotation: How cats and the suckers who love them are:
"She would periscope both ears forward, tilt her head, and finally shutter her eyelids downward, as if they were handkerchiefs falling from a window, thereby completing her dastardly plan. She had now deftly smelted me of doubt, leaving only the pink, bubbly mess that was my heart, and a stupid glazed, kitty-loving grin on my face."

It was time to learn to speak Cat. btw Today is the fifth anniversary of Eric and me adopting our beloved cat Farfel, who is beloved. In other words, I LOVE FARFEL SO MUCH.