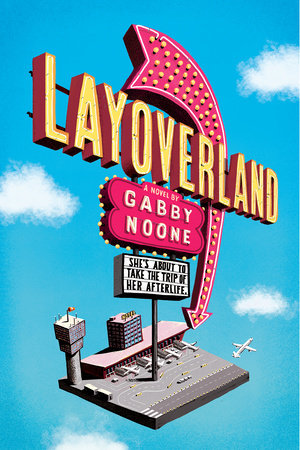 Disclosure: I know the author and editor (Alex Sanchez) a little. I was their librarian when they were in college. And, I'm sure it's just a coincidence, but there's a character in the novel named Jenna, who is relentlessly cheerful. JUST LIKE ME. Then again, since they only knew me a little, and I may have been relentlessly cheerful as their zine librarian and personal librarian, they may not know what a fucking monster I am.

On the topic of monsters, protagonist Bea is not the kindest, most other-centered person. She is smart and politically astute, but has some growing up to do. Good thing her layover in purgatory is set to last at least 5,000 days (13+ years). She'll have time to reflect and learn.

In Layoverland, you are stuck in whatever you were wearing when you died, including make-up, so of course I wondered the same thing as Jenna,

"Have you ever thought about what would happen if you died while on your period?" she asks from behind the bathroom door, unfazed by my reaction. "Like, our bodies are frozen in time, so does that mean you'd have your period the whole entire time you're stuck here?"

She further speculates about how menses might have played out in Twilight. My kind of Jenna!

Here's Bea being smart and politically astute with her love interest/nemesis Caleb, who describes his dad,

"Now he's one of those people who identifies as 'socially liberal and fiscally conservative.'"

To which Bea responds,

"Oh, so he thinks the problems that plague society are bad but their causes are fine?"

Even if Bea isn't especially self-aware about her selfishness, author Gabby Noone is. Here's a conversation with Bea's younger sister and only friend, Emmy.

"You don't actually care about changing the things you get so upset at people about," she said finally.

"Inequality, all the school rules you call 'fascist,' racism, sexism...all of it. You don't actually do anything to help stop these things or anyone they affect. You just love getting mad at people you see as morally inferior to you and ruining their lives to prove a point, but I don't know what your point is."

I read an ARC (thank you, Alex!), but that means that there is content missing, including the acknowledgments. I love acknowledgments, and I'm going to have to wait until January 21 to read them. It's a struggle.

Anyway, Gabby is a clever writer, which you know if you follow her on Twitter and Instagram, which you probably do because she's an influencer. The purgatory concept works and is well-drawn: full of mediocrity, like an airport hotel, and the cruelty of randomness for people awaiting their release. Strong first book for a bb (she just turned 26)! I'm excited for Gabby and Alex. ♥ ♥ ♥