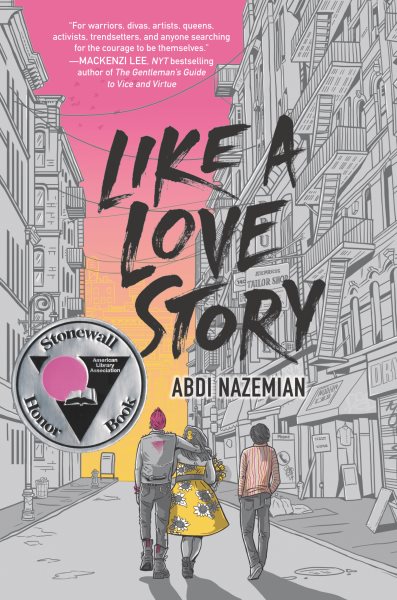 It's 1989, and Reza is the new boy at school. He's moved from Tehran and Toronto to live with his mother, stepfather, and brother, a douchebro named Saadi. Reza is a tightly-wrapped good kid with a proper English speaking style, and yet, he's immediately drawn to the weird kids: Judy, a fat girl who makes her own clothes and has more style than anyone in their school, even though they're in Manhattan, and Judy's best friend, the flamboyantly out Art.

[Judy] looks like the kind of woman who could play Molly Ringwald's best friend in a prom movie.

Judy and Art already have a third to make them a trio, Judy's uncle Stephen, who has AIDS and frequently participates in ACT UP demonstrations. Art wants to be part of the action, but since he's underage, Stephen limits him to taking photographs. One day, at the Stock Exchange, Art sees Reza looking on. Reza denies he's there for the demo, and is definitely not gay.

Except of course he is.

Like the reference to Molly Ringwald above, this book oozes late 1980s references. One of my favorites is Art telling Reza's mother,

I might have said the same thing myself at that time. Though the book is mostly a romantic love story, it's also about platonic love, and the ferocity of political passion. The critique of Reagan's inaction on the AIDS crisis and capitalism in general carries throughout.

I momentarily freeze when the door opens to reveal the trading floor. There's something majestic about it. All those people in their muted colors, all those computers, all those lights. People moving so fast that they barely notice each other. You can almost hear the numbers crunching. You can almost feel bank accounts getting fatter, and land being destroyed, and people being taken advantage of, and the stink of greed and death being spritzed into the air like those perfume samples in the Bloomingdale's lobby. Everything about the energy of this place says that what happens here changes life, for the better if you're one of the chosen few, but mostly for the worse.

There's so much in that paragraph in Art's narration! Art is Bartholomew something something VI, so he knows what he's talking about, and what he's flouting. Still, he's hella privileged, and Judy calls him on it when they fight.

You're self-centered, and you've always had the world served to you on a platter and you're upset when that's not the case.

So much realness, which I didn't realize until I read about it in this novel, is a ball term, and gives me even more love for Janet Mock. And also a lot of love for Uncle Stephen and his crew, who attend hundreds of funerals and keep fighting back, long after their bodies have betrayed them.

The end of the novel has Art reflecting on the 2016 Pulse nightclub shooting. What he's learned from Stephen is that there's no future without a past.

Clearly this book is written by someone who was there. Nazemian has as much passion as his teens and the wisdom of his elders.

Thanks to my sister Danna for recommending it. Follow her on GoodReads. She's the best reader!

PS The title is a reference to Madonna, who the teens are all obsessed with: Like a Prayer and Like a Virgin.