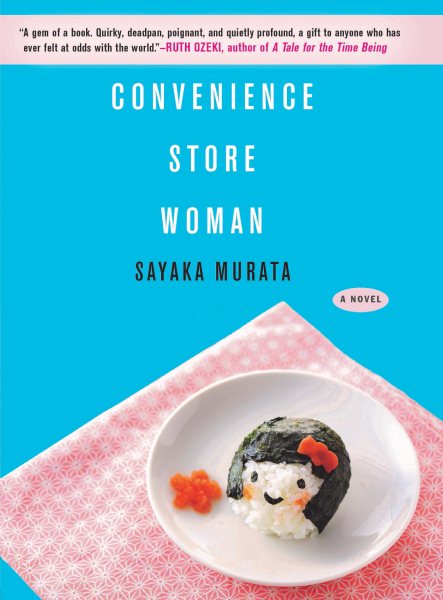 It's a slight novel, just over 111 ebook pages, but it's a tight 111 pages that leave you fulfilled, even if you don't think a convenience store woman's life would be fulfilling. At 36, Keiko has been working at a convenience store for half of her life. It started as a part-time job when she was in college...and it's still a part-time job. (It sounds like she works full-time hours, so maybe "part-time" means something else in Japan? I think the point is that it's not a career.)

When Keiko was trained at the store, everything made sense, and continued to, which was unusual for her. The word "autism" is never mentioned, but as Keiko studies and emulates people's expressions and vocal patterns, it seems clear that she is somewhere on the spectrum. Her neuro-atypical state is part of her from childhood, and she is baffled by neurotypical logic (Why wouldn't they eat the dead bird? Why bury it? Why wasn't she praised for stopping a fight by beating a combatant with a tool, rather than punished?). At the store, there are rules and regularity. But Keiko has learned the store enough to be able to anticipate irregularities. The convenience store is her savant!

No one sees that, though. They see her weirdness and think her broken. She is unmarried and without a career or children. Finally, Keiko sees a way to get her family and coworkers off her back--playing house with an incel. That goes as well as you might expect.

I love how much I learned about the brokenness of the neurotypical. We are such weirdos!