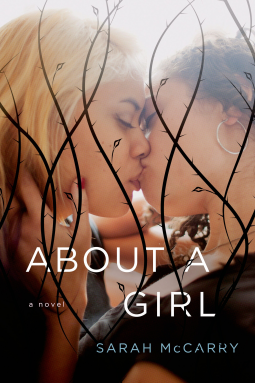 The title and cover image might lead you to believe this is a lesbian romance. There is some lesbian romancing, but the eponymous girl isn't who you think. Our heroine is a Scientist. She's practical, and, it has to be said, a little arrogant--in a realistic teenage way. The summer before she goes off to college (prestigious school, full academic scholarship), Tally gets in touch with her less practical side. There's love, sex, lust, anger and all kinds of other emotions.

I won't be the first or last to compare Sarah McCarry to Francesca Lia Block. The queer fairy tale quality is unmistakeable, but to me, this third book of McCarry's Metamorphoses trilogy (you don't have to read the first two to read the third, really! I didn't.) is for a slightly more grown up audience than the Weetzie Bat series. (Confession: I don't love Weetzie Bat the way most of the zine girls do.) (Also for the record, I'm friendquaintances with Sarah. She's a zine girl, too, and we've traded zines. I've long been a Glossolalia fan.)

Sarah pulls off some fancy writing, with solid passages like "But after a day or two I gave up pretending to myself that I was not looking for her and took to lurking at Kate's in the afternoons, sipping the bitter-tasting beer for which Kate never charged me and gazing morosely at the dark polished wood of the bar, hunkered on my stool in the dim light while outside the sun buttered the sidewalks and a cool lively wind filled the white sails of boats, tiny sharp triangles against the blue water." Bitter, dark interior and SUN-BUTTERED SIDEWALKS, cool, lively, bright and blue exterior--get it?

Our young astronomer, raised by a sometimes lesbian "aunt," the aunt's gay best friend and the best friend's long-time lover, is a feminist.

"It doesn't matter. I'm just saying, it's not that women aren't smart enough, it's that they don't get the credit, or they get written out of the story. These days they end up in some fucking 'Ten Hottest Astrophysicists' article in a magazine with nothing at all about their research. Joceyln Bell discovered pulsars when she was a graduate student in the sixties--*discovered* them, *herself*--and her professors won the Nobel Prize for it.

There's lots of other good info on women scientists, sort of an anti-microaggression where young women are educated as they read.

Clearly Sarah has experienced the return to NYC in the summer from the Pacific Northwest. "Walking out of the airport was like walking into an open mouth full of unbrushed teeth, and I winced; I'd forgotten what real heat was like, and the stink of the city." No. Shit.

I love that the acknowledgments ends "And for all the girls who are part monster: This book is yours."