It took me a little while to get into this post-pandemic novel, but once I was in it, I was uncomfortably in the lonely world where only .6% of the population survives a flu outbreak. I'm still not getting a flu shot, btw. 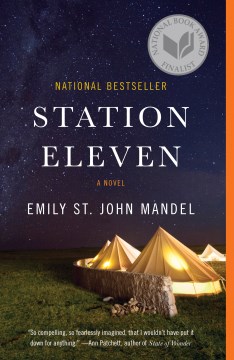 There are a few characters the book follows. One of them is an actor, Kirsten Raymond, whose present is 20 years after the flu, and who travels with a symphony and Shakespeare company. Their motto, from Star Trek Voyager is "Because survival is insufficient." They also seem to follow the prime directive, per this incident involving a stowaway:

What to do with Eleanor? They knew they risked accusations of kidnapping and they had long adhered to a strict policy of non-intervention in the politics of the towns they passed..."

A walk-on character expresses how I'd feel about surviving such a flu:

"You must be immune," Jeevan said."

One of my favorite things in the book, because librarian, is the Museum of Civilization, housed in a Michigan airport. Here's how it starts:

Clark placed his useless iPhone on the top shelf. What else? Max had left on the last flight to Los Angeles, but his Amex card was still gathering dust on the counter of the Concourse B Mexican restaurant. Beside it, Lily Patterson's driver's license. Clark took these artifacts back to the Skymiles Lounge and laid them side by side under the glass. They looked insubstantial there, so he added his laptop, and this was the beginning of the Museum of Civilization. He mentioned it to no one, but when he came back a few hours later, someone had added another iPhone, a pair of five-inch red stiletto heels, and a snow globe.

There's a whole bunch more I love, on how the snow globe came to be, how many hands had been involved in conceiving, creating, and transporting it, and how it came to be in the airport.

On the religious cults that rise among the flu survivors, "That kind of insanity's contagious."

Along the lines as the Museum of Civilization, the museum's curator and his pals marvel at the dumb things people would say to one another back in the day:

"I did that too. Because, what, it would've taken too much time and effort to say 'thanks.'"

Other language they find baffling in the Severn City Airport, pop. 300 are words and phrases like "shoot an email" "circle back" "touch base."

It's literary; it's funny; it's Canadian. Give it a read!