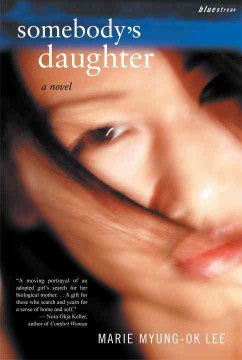 A college-age transnational adoptee spends a semester in her home country, trying to find her mother and herself. Sarah Thorson, who after her first 18 months grew up in Minneapolis, returns to Korea, where her name, mispronounced as Sal-ah, means "child for sale." The other Korean-American kids are jerks to her because of her lack of Korean language skills and knowledge of Korean culture. She eventually finds a boy to be nice to her and improves her Korean pronunciation, if not her comprehension.

I like that the book didn't go where I expected it to, even though I hoped it would. I also like how Sarah, flying to Korea in 1993, wonders about phone lines running through oceans. Me, too!

btw I found this book because I read another book from Beacon's Bluestreak imprint. Their "A paperback series of imaginative literary writing by women of all colors" motto was catnip to me.