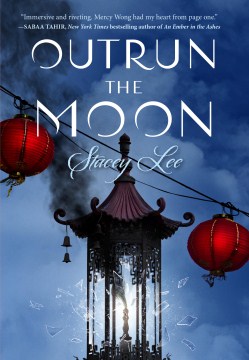 Mercy Wong lives in 1906 Chinatown and has entrepreneurial dreams beyond her parents' laundry, which is meant for her younger brother, Jack, to run anyway. She's a disciple of The Book for Business-Minded Women by a Mrs. Lowry, which Mercy discovered at the Laurel Hill Cemetery library. This is the kind of girl Mercy is:

In my fifteen years I have stuck my arm in a vat of slithering eels, climbed all the major hills in San Francisco, and tiptoed over the graves of a hundred souls. Today, I will walk on air.

She's willing to get her hands dirty, work hard, and tempt fate, and her eye is on the impossible. All of these characteristics come out as the story unfolds.

Outrun the Moon is historical fiction at its best, though Lee admits the implausible plot points in her author's note at the end. My favorite parts of the story are the Chinese lore Lee imparts, mostly via Mercy recounting things her fortuneteller mother says, about physiognomy and palm lines.

"And this is Wong Mei-Si. Your pardon, sir, she has too much phlegm in her spleen." That is his way of saying I'm foolish.

"I hope you will not choose this girl as your wife," says the old man to Tom. "Even a pretty name like Beautiful Thought cannot hide her bossy woman cheeks."

I bow my head, not letting on that I take this as a compliment.

Mercy gets herself into a proper girls' Catholic school, where she is the only non-white student, though the Italian girl, Francesca is considered to be a little on the brown side herself. Still, Mercy is among them and one of them, all while her family toils across town, knowing nothing of the life Mercy is now living.

I don't know why it surprises me that the Southerner and I share something in common--a desire to see the world, hampered by the world's desire not to see us without a husband on our arms. we are both girls after all, born into the same social girdle that comes with having a womb, despite our cultural differences. In many ways, I have more in common with the students of St. Clare's than I have with my Chinese brethren.

We see where Mercy stands on whether she faces more discrimination as a girl or as a Chinese person, though many incidents in the book show that Chinese were considered and treated as subhuman in early 20th century San Francisco.

Recommended, especially if you happen to be visiting San Francisco while reading it, as I was.