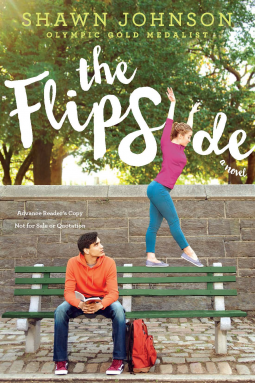 Charlie Ryland, elite gymnast, works as hard at her personal life as she does at her athletics career, and she doesn't want special treatement in the latter. Therefore at public school, where she returned after feeling isolated as a homeschooler, she goes by Charlotte and tells no one of her Olympic aspirations, even knowing that come the Olympic trials near the end of the school year, her secret is likely to come out.

The keeping-the-secret thing and the girl gets/loses/gets boy back thing are repetitive and predictable, but forgivably so because it's fun to imagine life as pre-Olympian Shawn Johnson. Charlie is as likable as Johnson. I really want to know how much of the book was written by her and how much by her "with" writer Sonnichsen!

One other thing I like, and I wish you could tell from the cover, is that Charlie's world is racially diverse. Her gymnastics BFF is Black, and her love interest is Indian. Some authors throw in a bunch of characters of color and it feels forced or fake, but in The Flip Side it feels matter-of-fact.