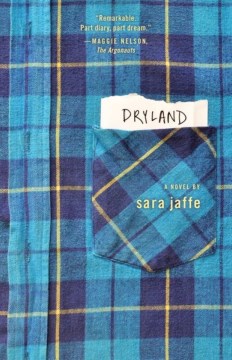 I love the book design with it's flannel nodding to 1990s Pacific Northwest grunge and lesbian fashion and interior design credit on the copyright, but I am disappointed in the book jacket copy.

It doesn't let you know that Dryland is about a queer kid, and the thing about finding or letting go her brother is misleading. Plus--carrying an umbrella--is that based on a previous revision?

Sara Marcus's blurb is way more accurate, "Dryland is a gorgeous, layered, meticulous, clamoring, beating heart of a thing about a sullen teenager swimming and not swimming, kissing and not kissing, in Portland in the days of grunge. It will make you want to swim there back there back twenty times without stopping.”

In critiquing the writing about Dryland, I'm just putting off my own analysis, because this is a smart, wonderful read that I don't know how to describe. It's an adult novel about a teen in crisis. Julie, to use the swimming metaphor, is adrift. She doesn't yet know who she is and seems simultaneously unbothered and deeply troubled by her untethered state. She doesn't fully recognize her crush on a popular girl (Alexis, who has a boyfriend), she doesn't know what's going on with her absent brother (who for the first chunk of the novel I thought was dead), and she doesn't even really know what she's doing on the swim team, other than being near Alexis. She's somewhat at odds with her loyal and boy-crazy best friend Erika, who jumps in the pool/swim team with Julie, and lies to her parents, mostly to protect her privacy, rather than to get away with anything.

Jaffe's writing is meticulous and poetic. She lets reader in on Julie's state of mind with descriptions like, "In my gray-blue raincoat I was the same color as the rain and the buildings and the sidewalk." Julie both fits in with her environment and disappears into it. She deals quiet but potent analogies such as, "The floor of the pool was toothpaste blue and my shadow was that cool, fast color." You know exactly what toothpaste looks like and can picture Aim or whatever brand with its braided colors, again putting Julie inside and outside of normal. Toothpaste also brings to mind refreshing cleanliness, but ambivalence in that it's something you have to spit out when its work is done.

I also admire how Jaffe/Julie uses cues to suss out the world around her, like she's alien to it. "[Her brother's friend Ben] was wearing a T-shirt of The Smiths. I knew they were a band but I didn't know what they sounded like or what type of person would listen to them." Then she brings it closer, trying to relate her brother Jordan's friend's character and to figure out Ben's relationship to Jordan, "From the look of the photo on the shirt, of a man's bare chest half in shadow, I doubted they were a band my brother would listen to."

What her brother would listen to, and what her brother is about is a separate thread of the story. Jordan's identity ultimately informs Julie's (but it's still weird how it's handled in the blurb).

There are lots of other bits that I'd like to pull out, ponder, and celebrate, like Jaffe's choice of a Mounds bar for a pigeon to peck at, but I'll leave it at that and share one last thing, which is that like Julie eventually settling on distance for her swimming speciality, this is the kind of book you want to read for sustained periods, not like a classic genre fiction page-turner, but like something that deserves your undivided attention.