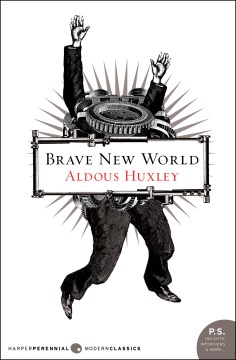 This is another Readings in Fascism class read. I feel like I read this sometime in the last 10-15 years, but I didn't remember a lot of it. It's a better read than 1984, not nearly as dry, and dear dog no pages and pages of Goldstein's manifesto (which tbh I skipped). Oof--I think I had a dream about George Orwell last night. He was a self-satisfied jerk. Huxley doesn't come across quite as bad, but BNW is also didactic af. A classmate revealed that BNW was originally written as satire, which makes me like it better. Good Ford--with names like Marx and Lenina, I was like "what is he getting at...?"

Anyway, it's another novel that would never pass the Bechdel test with each of the three women with speaking roles pathetic for one reason or another. We talked in class about how we'd rather live in BNW's dystopia than 1984's. Guh--I bookmarked a dozen pages, but I don't have it in me to re-read them. I still have 75 pages of fascism to finish for Thursday's class and two more books for class the week after. Stay tuned for It Can't Happen Here and On Tyranny.