Story of My Tits, the 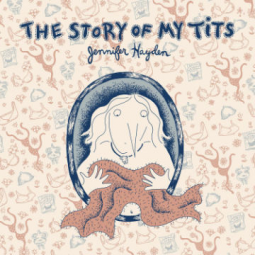 Jennifer Hayden's boobs were late bloomers, but made up for lost time going from 32AA to 38C before stopping. (Or was that 36C?--it's hard to look stuff up in a handwritten graphic book.) So yeah, Jennifer hangs her story on her breasts, but it's also the story of a really sweet marriage. Hayden's husband's wedding vow was "With this ring, I marry you, my beloved and my best friend," inserting the word "best" to the minister's prompt.

A lot of emotional work went into Hayden's memoir, processing her relationships with her parents. As a young women she feels she has "killed" her father by not responding to his wordless gesture of putting his hands on her shoulders after she finds out he'd been cheating on her mother. "Worst thing I ever did." Whut?

Even with the therapy stuff, Hayden can be funny about her angst, ascribing an edict from the Marquis de Sad, "Yes, you crazy bitch! Write! Oh, the pain, it's delicious...Now...REWRITE!" And she footnotes it "Translated from the French." Snicker.


Post-mastectomy Hayden prances around braless, referring to her former breasts as "the toxic puddles of fat on my chest." She ends up getting size C implants. I wonder what I'd do. I can imagine not wanting reconstruction at all, unless I ended up concave. Ugh, breasts, totally overrated if you're not nursing a baby.