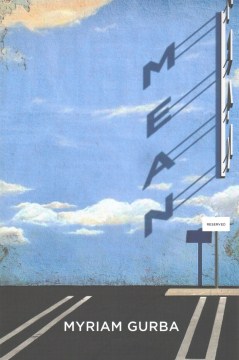 Dear dog, this book is richly written. Gurba writes prose like a poet. Early on, from a chapter called Wisdom:

In a tunnel beneath the bleachers, a gopher daydreams. Roots sigh. Earthworms blindly go about their business.

The dark-haired girl isn't Gurba; it's a girl walking without anything on under her skirt, a girl in danger, whose "toothbrush hits the ground bristles first." That toothbrush image! An instrument used to care for oneself, and one easy to defile.  Then, a few pages later, still in Wisdom,

I love Bulgarian yogurt. So rich, so tart, so mean. So grown up.

Remember the book is called Mean, and it's Gurba's self-descriptor. Rich, tart, mean, grown-up anthropomorphic yogurt, and it's about a girl named Sophia, like the capitol of Bulgaria, a girl, who like Myriam, was raped, a girl who didn't survive. Sophia means wisdom.

I don't want to quote every description that gave me chills, but I have to share this one:

From the doorway, Dad stared at Mom. The bed glowed red from her blood. Dad wrapped her in wet sheets and threw her into the Pinto. He sped to the hospital, where a doctor wearing a leisure suit sunk his scalpel into Mom's abdomen. He cut a slit, reached between the lips, pulled me out, and held my blue body. He spanked me. I halfheartedly breathed.

This set the tone for the rest of my life.

A violent birth and a "meh" response. I'm not sure that's how I really read Gurba, but it's a hell of a birth story! I think meanness calls for more than a halfhearted effort, though, like Gurba's take on feminism,

Being mean to boys is fun and a second-wave feminist duty. Being rude to men who deserve it is a holy mission. Sisterhood is powerful, but being a bitch is more exhilarating. Being a bitch is spectacular.

But maybe she's mean because even when she's not being mean, she gets in trouble.

I pointed at the lot of them and said, "They call us wetbacks and tell us to go back to Mexico. Those girls are racists. And she's not even Mexican." I pointed at Ida.

White lower lips quivered. White eyes grew glassy. One by won, white girls burst into tears. Ida and all the Mexican girls looked at each other, like, seriously?

"Apologize for making them cry," said the English-only teacher.

"Sorry," I said without any sincerity.

I bookmarked a dozen more pages with vicious and beautiful images and clap backs, but I'll leave them for you to discover about queer, mixed race Myriam Gurba's coming up.