It's 2039. Scientists have cured cancer and the common cold. Unfortunately in so doing, they have also created a virus that turns all of the dead or infected into zombies. Good thing there are some blogjournalists on the scene to find out who's weaponizing the zombies and training them on a presidential campaign. 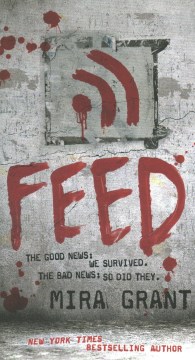 The zombie part of the novel is well-imagined, and the story is utterly compelling, as are the characters. The only thing that bothers me is that by 2010 when the book was published, blogging was a reasonably trusted form of journalism, though already dated. The way the bloggers are reacted to reminds me of the 2004 DNC, when bloggers were credentialed with much fanfare. If it was microbloggers, or better yet meme Tumblrists, that might be more appropriate...for 2012.

There are fierce and brilliant female heroines, an adopted-sibling bond that's quite moving, an inside look at disability, clever pop culture references (and some that miss the mark), and the religious right is portrayed as more than a little dangerous. The main thing, though, is that it's a page-turner, and part one of a trilogy. There's one other thing you should know going in: bad things happen to good people.

This is the first novel in the Newsflesh trilogy.

See, Berkeley has always drawn the nuts and flakes of the academic world. That's what happens when you have a university that offers degrees in both computer science and parapsychology. It was a city primed to believe any weird thing that came across the wire, and when all those arguably crazy people started hearing rumors about the dead rising from their graves, they didn't dismiss them. They began gathering weapons, watching the streets for strange behavior and signs of sickness, and generally behaving like folks who'd actually seen a George Romero movie.