Fannie Flagg novels always go down easy and are southern charming as all get-out. All-Girl centers on a 60-year-old woman who finds out she's not southern, at least not in the southern way of knowing who your people are a few generations back. It's also about Women Airforce Service Pilots (WASPs). Unless you're a real crankypants, you should be moved by protagonist Sookie Poole's evolution, the WASPs accomplishments, or both. I sniffled quite a bit reading about the titular event while riding a New Jersey transit train home from Jewish Christmas. 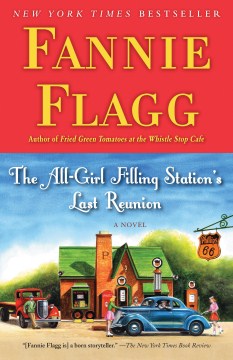 Here are a couple of examples of Flagg's lovable prose. The second also shows you what Sookie's mother was like.

And Ce Ce, Le Le's twin sister, the last girl to marry, had carried her ten-pound Persian cat, Peek-a-Boo, down the aisle instead of a wedding bouquet, and the groom's German Shepherd, dressed in a tux, had served as best man. And if that wasn't bad enough, someone's turtle was the ring bearer. The entire thing had just been excruciating. You can't hurry a turtle. A note about the subject headings in NYPL's catalog record--as plentiful as they are, they're not ideal.

Women — Fiction too generic
Female Friendship — Fiction not central to the story
Family Secrets — Fiction sort of
Service Stations — Fiction despite the title, not important at all
FICTION / Contemporary Women what thesaurus is this?
FICTION / Humorous I guess a reader might be looking for something funny to read, but this still seems awfully big
FICTION / Historical some of the story is historical, maybe 20%, so this heading might work
Domestic Fiction Yes, though it's not what I would have thought of
Historical Fiction ^^