Like lots of people who watched the Summer (for the northern hemisphere, anyway) Olympics, I was immediately enamored by Gabby Douglas. She's so talented! Pretty! And her being Black in a sport disproportionately dominated by White athletes, at least per this USA Gymnastics Diversity Study is part of her appeal, especially considering how biased the media coverage was. Consider that Jordyn Weiber was the girl-to-beat going in, but Douglas is the one who won the Olympic trials. 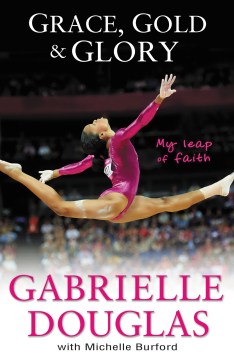 Oops, I don't want to get distracted from the review of the actually book I just read. I'm no expert on the Olympics and the racial bs that were part of them, but I did read the whole book.

Douglas comes off in her autobiography as a sweet kid. It always gives me pause when I remember that that's what most elite women gymnasts are--kids. I'm not saying that part of their brains aren't incredibly mature and focused, but have you ever listened to them being interviewed? They sound like Candyland.

The book isn't sophisticated or deep, and I didn't expect it to be. It does give you some idea of what Douglas's life (including her family of six living in a car shortly after Gabby's birth) was like and some tidbits along her road to gold and glory. She's not kidding about the grace part. In case you didn't know, Douglas and her family have definitely accepted Jesus as their personal saviors, though they did dabble in Judaism for a time. The darkest moments are when Douglas writes about her absentee father, though she does so with love. She's a sweet girl, and I hope she decides to go to college at Barnard!