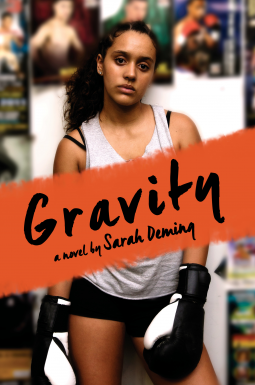 FYI I can't believe there is a sport where the object is for one person to do so much damage to the other person that they fall to the ground and can't get up. That being said, I still enjoy a good sports novel. Boxing, possibly more than other sports (any other sport) is a total test of one's totality: physical and emotional strength, endurance, heart, etc. Other than bad judging, there's pretty much nothing that can impact which boxer gets their hand held up at the end of a bout.

Gravity enters the ring at 12 a novice, but by the time she's 16, she's undefeated and a Golden Gloves winner. She's a hero at home, too, caring for her eight-year-old brother because their father is gone and their mother is a selfish alcoholic. Her story is hard--in the ring and out of it, especially when she's betrayed by her first boyfriend.

When she's fighting, she's on her own, but she comes to realize that she can lean on her family, her coach, her friends from the gym, teachers, God, and her teammates. Religion doesn't play a huge role, but half-Jewish and half-Dominican, Gravity says the Shema before every fight.