Early Decision: Based on a True Frenzy

She was already the daughter of a celebrity; an alumni connection could help only so much more. Why on earth hire an independent consultant, too? But then, there were Anne's clients: the parents who left nothing to chance. They refused to play with a deck that wasn't stacked. They'd raise a child unvaccinated before they'd consider letting him apply to college unaided.

Anne helps privileged (and one unprivileged) students get into college, mostly by working with them on their applications essays, but also a little bit by handling their families. 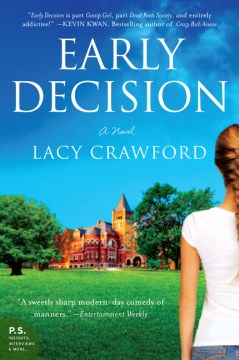 A book about writing calls attention to its own prose, and Crawford manages to live up to the scrutiny she invites. The students, despite their privilege, are sympathetic, as is Anne. The weakest element is the romance because you know her boyfriend is a douche long before she does. Then again, isn't that always the way?