Kim says this will be the final issue of her zine, which makes me sad. I've been exchanging zines and letters with her for a while now--a year or a little bit longer? I wasn't sure how I felt about her and her defensively titled zine, at first, but she came to be one of my favorite pen pals, and her ultimate zine is also one of my favorites. 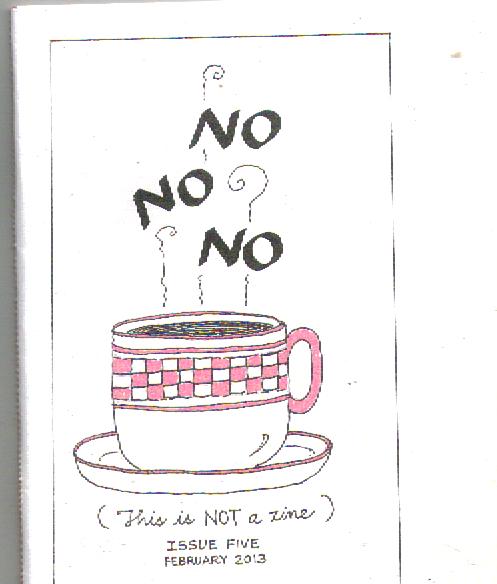 On a purely objective/artistic level, mail artist Kim's zines are accomplished. She's a wonderful illustrator, has the most scrumptious handwriting, and sews the binding of each copy. This issue even features some dada collage and one of the most striking, rending, simple, powerful images I've ever seen in a zine:

The "Remember Me" heart is on a sticky note, so each one is handwritten, but on something even more ephemeral than a zine. And sticky notes are usually used for something casual, while this is a serious plea. The sticky closest to me at the moment has "6/30" written on it, which I stuck on a book so I'd remember what day I finished it and NNN#5. To me that's mad poignant; I don't know about you.

Content-wise, five issues in, Kim's zine is fully mature--and I don't say "mature" as a euphemism for Kim, who is at the mature end of the zine makers' age spectrum's age. It just takes a while to get the hang of the perzine thing. My homie Celia dubbed my zine grown up in its third issue, but I'd number five is more like it for me, too. I like that she refers to previous zines and feedback she's received (disclosure: in this case, the feedback was from me!) and that she's just generally thoughtful and honest about her life.

I told her in a letter, and I'm saying it here in public, too--please don't stop making zines (or writing me letters, for that matter)! Kim, like many of us--most of us?--all of us?--questions her belonging in the zine subculture, when really all it takes is reading and writing and caring and for the most part not being a jerk.

There's no price listed, so write to kcody@columbus.rr.com for ordering into. She doesn't make many copies, so don't let the grass grow.