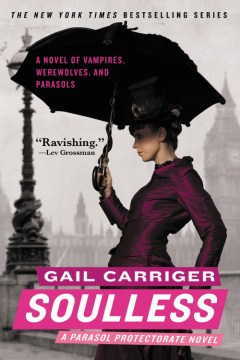 I'm unreasonably (?) annoyed that Gail Carriger is a pseudonym. It makes me wonder who the author really is. Maybe a man? I've hunted around a little, trying to determine the author's real name and whether I'm the only one who wondering about her gender, but haven't found out.

Anyway, I read Soulless because Celia mailed be a copy of Changeless, the second book in the Parasol Protectorate series, and of course you can't read the 2nd without reading the 1st first. It's hard enough to read books that aren't due back at the library at all, but I did a major straightening and am determined to read through my to-read list. I'm making a little progress, but I do keep bumping books I own with library books. All my NYPL holds are coming in at once!

Anyway again, Soulless is cute and fun. It's an imaginative romancey quick read. Carriger--whoever they are--does a good job of envisioning what late 19th century science would look like, if it involved vampires and werewolves. Alexis Tarabotti is a feisty heroine (that is to say strong, but hampered by contemporary mores), hampered in life by "not having a soul and being half-Italian." She's tall, curvy, dark, and has a dead papa who, like her, had no soul. The whole "no soul" business isn't fully fleshed out in Soulless, so I'm definitely going to read Changeless to see what's going on.

Carriger amuses themself with fancy 19th century British English like, "To put the pudding in the puff: she had retreated to the library, her favorite sanctuary in any house."

Carriger amuses me with their assessment of the 19th (and 21st) century United States as a country ruled by religious superstition and business interests, "Strange place, that overseas land, where religion and wealth did the talking and history and age held so little sway."