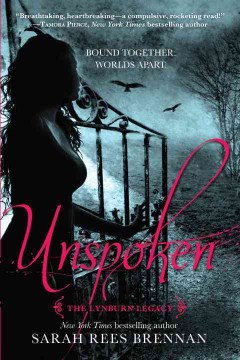 Maybe because I'm in a bad mood I'm having a hard time describing the last two books I enjoyed reading. Unspoken, the first book of the Lynburn Legacy, unites teens IRL who have been communicating telepathically their whole lives. Kami, the protagonist is a likable character, as are her girl friends, but the boys I don't really get. The ancient British town elements are cool, and I appreciate the book's inherent feminism, with paragraphs like

It would be nice to be crazy beautiful for a day, Kami thought, and then told herself that the way things were always happening to her--through no fault of her own--she might start a war like Helen of Troy. Being beautiful would probably be too much of a hassle.

Friends who didn't care how weird she was; in retrospect, Nicola had done Kami a favor.

I relate to Kami's anarchist interpretation of the law, "If we could make matters clear to the police, I'm sure they would look at these deeds. But we can't, so we are forced--yes, forced!--to do this ourselves. Morally, this is legal." That's what I was trying to convince my fellow grand jury members about setting aside our legal charge. They didn't buy it!

Is there any librarian who can't relate to this impulse?

Unfortunately, along with the lack of security was a lack of organization. Kami spent a while finding a lot of entries for this year's guests in last year's file. She resisted the urge to reorganize it.