In the Unlikely Event 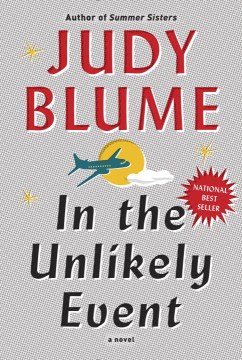 For a Gen Xer such as myself, there's a great nostalgia factor in reading Judy Blume, even more so if you're one who spent your Judy Blume years (she's most famously a middle-grades writer, though she's also published older YA and adult novels) in Union County, NJ, a few towns over from Elizabeth, where many of her stories take place, and where Blume grew up. This novel provides proxy nostalgia for me because it's about a series of unlikely events that my parents (a year younger than Blume and growing up in another town a few towns over from Elizabeth) experienced, too.

In the early 1950s when Blume and her protagonist are 15, airplanes crash in their town, and people die. That's a pretty intense thing to see or be part of in the best of times, but when you're a teenager (i.e., experience emotions intensely), it's cataclysmic. Miri is an only child being raised by a single mother. She and her mom, Rusty, share a two-family house with Rusty's mother and brother, but Miri spends most Saturday nights at her best friend Natalie's house. Miri covets Natalie's set-up a little, mostly Natalie's dad, who is a wealthy dentist, and a loving father.

The majority of the novel takes place in the 50s, but it's bookended by Miri's now, 1987, when she has emotional and physical distance from the time and place that had such a profound effect on her life.

As a Jewish kid in Westfield, NJ, I had some consciousness of the microaggressions that made me feel other--Christmas decorations in the town, singing Christmas songs in the public school choir, but I didn't understand how huge it was that Judy Blume matter-of-factly wrote novels about girls like me. She exposed happens-to-be Jewishness to a jillion kids, who took in Hanukkah and yahrzeit candles, without realizing it. Now I get it and love Blume all the more.

But back to In the Unlikely Event, nostalgia train: a trip to Grunings (known for their hot fudge, which my sister and I would eat from the jar), the Paper Mill Playhouse, and Route 22! (My aunt and cousin still live in Union County, so I see Rte. 22 occasionally.)

Blume is a class act when it comes to libraries. Her acknowledgments have a whole paragraph on librarians, getting specific, like thanking the ILL department and the archivist who set her up at the microfilm reader.

Her daughter Randy became a commercial airline pilot (her wedding announcement says she flew for Continental). I thought it was all-but impossible for women to get those gigs! I see that Randy is also responsible for the idea that became Forever when she "asked for a story about two nice kids who have sex without either of them having to die."

ItUE is a mothers and daughters story as much as anything else.