Wedding in Haiti: the Story of a Friendship, a

I have long enjoyed Julia Alvarez's reality inspired political fiction, I gobble up autobiographies, and because of my spouse's work with two nonprofits there, I have an interest in Haiti, so of course her Haiti memoir was appealing to me. Unfortunately... 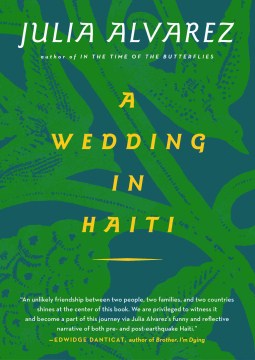 ...it's only meh. My armchair analysis is that Alvarez was so moved by her experience in Haiti and by her Haitian friends' situations that she wasn't writing from her artist place, but from a desire to do something. If that's the case, I can't fault her motivation, but I did find her and her husband's brand of doing something a little patriarchal, as encapsulated in this passage:

"Later, I will ask Bill why he wanted to see Port-au-Prince. Didn't he feel a little like a motorist who stops to gawk at an accident? 'I would have if I was just going there for myself. But now we have Piti. It was important for him to see it and for us to be with him when he did.'"

Piti is a young Haitian man Alvarez and her husband befriended and employ on their coffee farm in the Dominican Republic. It is his wedding that is at the center of this book. The couple feels almost like they've adopted Piti, and his spouse and daughter, and maybe both of their families, as well. But Piti is an adult. Can't he decide whether or not he wants to see the effect of the natural disaster that wreaked such havoc on his country, and does he need Americans to arrange, share and filter the experience if he does?

There's another passage about Piti that bothers me:

At an ex-pat hotel, "Piti shrugs. He just did not feel welcome there. While he was waiting for us, the receptionist, the porters, the people milling around did not look on him kindly.

"I'm surprised, as Richard Morse and his band are known for being huge advocates for the Haitian little guy. All I can figure is that Piti hasn't traveled widely in his own country. He has never had much contact with Haitians of the upper class. He has met plenty of upper-class Dominicans in the DR, but perhaps he takes it as a matter of course that he will be second-class in somebody else's country. Among his own people, it stings to feel those differences."

I don't understand how she gets from the hotel staff giving Piti the stinkeye to his lack of experience causing him to be over-sensitive.

Alvarez does genuinely love her Haitian peops, but throughout the book though she is constantly helping them she also seems to be in the way a lot. In helping one family, she disrupts others.

I think she is at her best when she's writing about her own family, in this case her parents, both suffering from Alzheimer's disease.

On her mother's Alzheimer's symptoms:

"She is losing language. Whole sheets of it have fallen away, planks of family history, elaborate stories, complex structures of syntax that she once could command in two languages. Nothing is left but a pile of pronouns, weak verbs, random words that she picks up, baffled as to what they are for. She wants to tell you...what was it? And if she remembers what it was, where are the words for telling it to you?"

Sadly, I can relate.

"We ride into the downtown area [of Port-au-Prince], full of ambivalence. To watch or not to watch. What is the respectful way to move through these scenes of devastation? We came to see, and according to Junior, Haiti needs to be seen. But something feels unsavory about visiting sites where people have suffered and are still suffering. You tell yourself you are here in solidarity. But at the end of the day, you add it up, and you still feel ashamed--at least I do. You haven't improved a damn thing. Natural disaster tourism--that's what it feels like."