The Library of Congress welcomes butches and femmes at last, but only if they're lesbians.

The Lower East Side Librarian Library of Congress Subject Headings of the month for Month 12, December 17, 2012 are:

150 Butch and femme (Lesbian culture) [May Subd Geog] [sp2012003858] (C)
450 UF Butch-fem (Lesbian culture)
450 UF Butch-femme (Lesbian culture)
450 UF Femme-butch (Lesbian culture)
450 UF Femme and butch (Lesbian culture)
550 BT Lesbian culture
680 Here are entered works on lesbians who assume a masculine or feminine identity or role, which may be manifested in manner or appearance.
As you may recall, I've been agitating, on behalf of the many butch or femme zines I catalog for a similar heading and that Gay Cataloging Mafioso Adam Schiff proposed Butch/Femme (Gender Identity) last year only to have it rejected.
This month some nice cataloger at Cornell University, proposed a Butch/Femme heading that was deemed acceptable to the nice folks at SACO. Some of the warrants listed, including the first one, are about sexuality and erotica. Two of the other warrants acknowledge that the concepts of butch and femme are nearly 100 years old. Unfortunately they do all reference lesbians/lesbianism, which is the part of the heading I'm not crazy about. Many of the zines in the Barnard collection that discuss butch and femme identity are by people who do not identify as lesbians or even necessarily as women.
That doesn't mean I won't use the heading. I already have! 150 Forced abortion [May Subd Geog] [sp2012004097] (C)
450 UF Compulsory abortion
550 BT Abortion
550 BT Involuntary treatment
680 Here are entered works on abortion performed without the consent of the pregnant woman or her medical proxy.
I hope I don't have reason to employ this heading anytime soon. 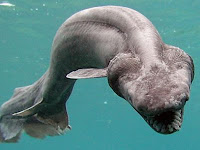 via Fish-Journal.com. Isn't she pretty?

There are other juicy headings this month, including eleven more on Turkish roads and Pear became Pears.

Two headings that were rejected this month:

Closeted lesbians
Since the concept of being "in the closet" is the same for gay men and lesbians, the meeting prefers not to have separate headings for closeted lesbians and closeted gays in general. Instead, the existing headings Closeted gays and Lesbians should be post-coordinated for the work being cataloged. The proposal was not approved.